Weight-Loss Floss and the Art of Health Behavior Change

Forget about willpower. You can’t rely on it. Willpower won’t help you eat less, add more veggies to your meals, put down the cake you think you deserve, or get you to the gym more often.

Well, maybe it will for a while—but then things fall apart.

Perhaps you get lazy or lack the motivation to continue. Maybe you decide the hassle isn’t worth it and then think, “If only I had more self-control.”

Most of us know people who seem to have willpower. They hit the gym daily with structured exercise routines. They bring tremendous enthusiasm to their workouts. They have their supplement schedules dialed in. They measure and weigh their food. They prepare their meals at the beginning of the week. They track their progress. They share motivational messages with us, either verbally, on their T-shirts, or on Instagram.

How do these people get this way, and how can we join them?

The Source of Motivation

Some people are intrinsically motivated to do these things. They believe in the importance of healthy behavior. They enjoy the process and find meaning in the activities. They can’t imagine life without healthy eating and exercise.

The rest of us don’t feel this way. We may be motivated to achieve in other areas—getting a degree, making money, being an outstanding parent, volunteering, building meaningful relationships, playing an instrument, creating art, or exploring the world.

You can probably identify the things you consistently do without having to rely on trickery or willpower. You do these things because they’re inherently meaningful to you, and that’s enough of a driving force.

If you’re not intrinsically motivated to commit to some type of healthier behavior, but you believe the consequences of the behavior are significant enough to make a change in your life, you won’t get very far if you depend on willpower.

If you find it hard to get started with an exercise program or if consistency is your problem, it’s time to get creative.

Pinpoint the obstacles to your change and directly address them. Even if your self-identified obstacle is that you’re “too lazy,” there’s still hope: You can even make laziness work for you.

The Power of Obstacles

Here’s how I used laziness to help me lose body fat.

Over the last year, I found myself struggling with time management due to a number of unexpected stressors. I was working long days and most weekends, which made healthy eating and exercise less of a priority.

Like a lot of people, I found myself thinking, “You have to do something about this,” which led to a pathetic behavioral response of occasional halfhearted attempts to work out or eat a little less.

One year and 20 pounds later, I decided enough was enough: It was time to tackle the problem.

The biggest issue was my overeating. I didn’t like the way I looked, I felt tired, and moving my extra weight at the gym was a chore.

I wanted to make the process as simple as possible to set myself up for success and increase my confidence in my ability to lose body fat.

The bottom line was that I needed to eat less, and I needed to find an easier way to do that.

After evaluating my habits, I realized that things fell apart for me at night. My habits were OK during the day, but I found myself getting home from work, ordering takeout (with dessert), and melting into the couch for an evening of mindless TV.

I also told myself that I “deserved” to eat some fun foods—cookies, cake, fast food—because I was stressed out.

For the most part, I was fine with this pattern. I occasionally considered healthier options, but when I did, I thought, “I’m too lazy to cook and I’m too lazy to go to the gym.”

So much for making a big change.

I eventually estimated that about a third of my calories were consumed on nights like these and so, to eat sensibly again, I had to prevent this behavior.

My strategy involved creating a logical obstacle. After some thought, I concluded that, after flossing my teeth, the likelihood of additional eating would be reduced dramatically, because I view flossing as a hassle.

Given that I already floss every night, I knew that I could consistently use this tactic. I usually floss right before I go to sleep. But I predicted that if I started flossing my teeth right after dinner, or when I determined that I had enough to eat for the day, the prospect of having to floss again after late-night junk food would be so unpleasant that I’d find something to do other than eating.

My prediction was right: For two months, any urge I had to eat was immediately struck down by the thought of having to follow it up with flossing. I was able to eliminate problem eating—and it was easy.

Computer Off, Workout On

Two months later, 11 pounds lighter, without any other lifestyle changes or feelings of deprivation, I decided to use a similar approach to get myself back to the gym.

I prefer to exercise first thing in the morning. I realized that my biggest obstacle to working out was my tendency to get on the computer in the morning to check my e-mail and read the news. What should take 10 minutes often turned into a couple of hours—and the disappointing decision to try again tomorrow.

The overeating problem was somewhat easier to address. I simply made it difficult to eat at night. But to increase a desirable behavior, I had to identify the obstacle and once again create a logical barrier.

Given that I usually leave my computer on all night, it was just too easy to use it again in the morning.

To reduce the frequency of computer use in the morning, I turned my computer off each night when I went to bed. For extra impact, I also turned off my tablet and smartphone.

Believe it or not, this simple change made all the difference: The thought of waiting for the computer to boot up was enough of a deterrent.

I was able to get back to the gym for regular workouts without having to rely on self-control. This simple behavioral strategy was much more powerful than trying to summon some sort of magical urge to get back on track.

How can you use these principles to modify your own health behavior? 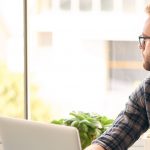